How 2 U.S. Airports Are Unshackling Bureaucracy to Give New Businesses a Try 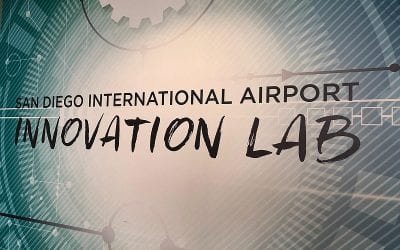 How 2 U.S. Airports Are Unshackling Bureaucracy to Give New Businesses a Try

Like many haggard business travelers, PJ Mastracchio didn’t like waiting in line for 10 minutes in an airport terminal to buy a soggy sandwich or salad.

Unlike most other business travelers, Mastracchio wanted to create a solution. By late 2014, he had begun thinking about building a company, now called At Your Gate, that would deliver almost anything passengers wanted, with a courier picking up food or sundries and delivering to them to customers waiting at a gate.

It seemed like an obvious solution, given most passengers have little time, and are already accustomed to delivery from mobile apps like UberEats, Grubhub, Postmates and others. Airports, though, weren’t sure.

“We talked to probably a 100 airports about this idea,” Mastracchio said in an interview. “Ninety-nine of them said, ‘it sounds like a great idea, go figure it out somewhere else.”‘

San Diego International was the one airport willing to try — and this was by design. The airport recently created an innovation lab to help and nurture companies like Mastracchio’s, which otherwise would find it difficult, if not impossible, to enter the highly-regulated world of terminal concessions. In January, At Your Gate made its first delivery to an airport employee— a bottle of water, and hummus and pretzels. By April, it was delivering to passengers, including, on occasion, to passengers already seated on airplanes.

“What we wanted to be able to do is try and get solutions in quicker,” said Rick Belliotti, San Diego International’s director for innovation and small business development.

Most U.S. airports are public enterprises, operated by cities, states and counties, or boards appointed by politicians, and they’re often risk-averse, with complicated policies and procedures governing what businesses can operate at them. It’s a major reason many airports were so slow to embrace Uber and Lyft, preferring to continue coddling taxis, no matter what passengers wanted.

But times change, and now San Diego is not the only airport seeking to be more nimble. Earlier this year, Dallas/Fort Worth International Airport hired its first executive vice president for innovation, Paul Puopolo, charging him with developing solutions for everything from how customers can go from curb to gate using biometrics to how the airport will accommodate autonomous vehicles on taxiways and on the terminal roadway.

Puopolo promised to look at any solution that could make life easier for customers and airport employees. But he said he’s not interesting in some ideas, like robots guiding passengers in the terminal, that seem fun, but don’t fix a problem.

“My job is to help the business focus on, ‘What problems are we solving for?”’ Puopolo said by telephone. “There are a lot of cool things that are happening but I don’t want to test technologies just because it seems cool. I think we have to solve a passenger problem.”

Like many U.S. airports, San Diego had a dilemma: Because its bureaucratic policies favored established companies, it could not attract innovative businesses,

So, led by Belliotti, it created a platform for businesses like Mastracchio’s. In a structured 16-week program, San Diego’s airport lets a handful of startups test their idea in a real airport environment — either an actual terminal or the airport’s empty, out-of-commission commuter terminal — and an opportunity to learn about the arcane world of public contact bidding. Afterward, they may vie for a contract at San Diego’s airport, though there’s no guarantee they’ll win.

In return, Belliotti said, the companies agree to give the airport a piece of future revenue, usually for about five years. However, the airport does not invest in the firms.

“It enables us to make it less scary,” Belliotti said. “A lot of companies are afraid of the public procurement process. It’s a very long and cumbersome process. We tried to look at creating something that would allow innovative companies to come into our space.”

Its most recent class of five businesses includes four startups that focus on improving the parking and car-share experience — a point of emphasis for the airport.

The fifth idea is Baggage Nanny. It helps passengers store their bags for the day, while they sightsee or go to the beach. A courier meets customers at baggage claim or at their hotel or rental property, takes the bags, stores them, and delivers them to the final destination. For now, it costs $20 per bag per day, regardless of size.

Crystal Browning, Baggage Nanny’s CEO, said she learned about the airport’s startup program after she asked how the company could legally operate at San Diego International. Before, she said in an email, it had been operating without a license.

“Having the exposure inside the terminals has been a good learning experience,” she said. “We’re currently trying to determine the hours where demand will be strongest and our price point as well. Without the program, both of these would be difficult to determine.”

Airport officials expected Baggage Nanny would be popular among customers who must check out early from hotels or rental properties but have a late flight, Belliotti said. But they learned customers with long layovers use it too.

“We have discovered this whole population that we weren’t considering,” Belliotti said. “That’s part of the beauty of what we are doing.”

With plans to offer two programs per year, San Diego wants to attract more startups that may make the airport experience more bearable, locally and elsewhere, including at malls, hotels, and convention centers.

“We are looking at it from, how do you develop a product that the passenger will want that will improve their experience?” Belliotti said. “We are giving these companies access to customers they have never had before.”

That’s what happened to Mastracchio’s At Your Gate, which has expanded to a second airport, Newark Liberty outside of New York City, with more to come.

“Once we get our first one, it became much easier to get our second, and our subsequent additional airports,” Mastracchio said.

EVOLUTION AT DALLAS/FORT WORTH

Even before Puopolo started in August, Dallas/Fort Worth International had been experimenting with several projects that could make the passenger experience better.

In February, the airport joined the TSA’s Innovation Task Force program, allowing it to participate in pilot programs to test new technologies.

And earlier this year, the airport got some buzz for testing “dynamic glass,” or special windows that reduce heat and glare. In the test, the glass helped the airport cut its electricity usage, while making the terminal more bearable for customers in the Texas heat. In June, DFW agreed to add as much as 500,000 square feet of smart windows, making it among the first U.S. airports to commit to the technology.

But Puopolo was brought in by airport CEO Sean Donohue to “establish a more formal way of looking at innovation,” Puopolo said.

That’s more difficult than it sounds. While airlines, including the airport’s top tenant, American Airlines, know more about their customers than most other businesses, DFW knows far less about who uses its terminals. Puopolo said the data exists — his teams just have to find it.

“There is plenty of data but what we have to go after is to figure out how to use it and what can we use,” he said.

While Dallas/Fort Worth may not create a program for startups like San Diego’s, Puopolo said he is interested in working with companies with innovative ideas. Some may be new firms, he said, while others may be more established companies with fresh ideas.

“We want to test things here with them,” he said. “We want them to learn what the airport business model could be. We wouldn’t necessarily be taking a stake in the company.”

Puopolo came from private industry after a stint flying helicopters in the U.S. Navy, so this is his first time working in an airport bureaucracy. But he said the airport, which is run by a government-appointed board, is nimble enough to keep pace.

“I came from insurance and health care, which are two highly regulated industries,” he said. “Regulations don’t bother me. That’s kind of standard.”